As Christians went forth from Jerusalem they encountered different traditions, cultures, customs and languages, soon the Church became a communion of Churches united in love with each other, looking to the See of Peter in Rome as the first among them all. The Gospel of Christ has reached the four corners of the world.

Jesus prayed for their unity, “that they all may be one” (John 17:21).For Catholics united with the Pope in Rome, there is already an amazing unity even within the reality of cultural diversity. The Catholic Church, comprised of 23 Eastern Churches and 1 Western Church, is a communion of Churches, with the Pope as the visible head, “gathered in the one spirit, breathing as though with two lungs – of the east and of the west – and burning with the love of Christ in one heart – having two ventricles.” (Sacri Canones; Pope John Paul II)

One of the Eastern Catholic Churches is the Maronite Church. She has Her own hierarchy composed of a Patriarch who is Her father and head, and over forty Bishops who shepherd the many Eparchies in Lebanon, the Middle East and throughout the world. The Patriarch governs the Church in a synodal manner with his body of bishops as is customary in the Eastern Churches.

There are six major traditions of the Catholic Church:

Each Catholic Church practices a common faith according to one of the six major traditions.The Maronite Church follows the Antiochene Tradition.

All Churches within the communion of Catholic Churches share the same:

All Catholics believe the same truths of the faith yet worship differently. One could say they share the same essence of faith, but have a different expression of that faith. Each Church embraces its own culture and tradition to express Her faith in Jesus the Risen Lord.

Each of the Catholic Churches:

The Maronite Church dates back to the early Christians of Antioch where “they were called Christians for the first time” (Acts 11:26).She still uses as Her liturgical language, Syriac, a dialect of the Aramaic that Jesus Himself spoke, and takes Her name from the hermit-priest, Saint Maron, who died in 410 AD.

Within a few years after Saint Maron’s death, over 800 monks adopted his way of life and became known as the Maronites. Later, the Muslim invasions (7th-10th Centuries), coupled with conflicts from within the Byzantine Empire, caused the Maronites to flee the plains of Syria and their churches and monasteries, to the natural protection of the mountains of Lebanon where they first lived in caves and grottos, and then later built small churches and monasteries. By 687, Maronites organized themselves around Saint John Maron, whom they elected Patriarch of the vacant See of Antioch, and thus developed as a distinct Church within the Catholic Church.

The Maronite Church has been enriched by three centers of learning and culture:

Antioch: A city in West Syria (now Turkey) that served as a center of commerce and education and was known for its Greek and Syriac culture. Antioch gave the Maronite Church much of her unique liturgical life.

Edessa: A prominent city in ancient Mesopotamia, which had a Semitic culture and influenced the prayers and hymns of the Maronite Church. It was also the home of Saint Ephrem, Doctor of the Church, who gave the Maronite Church much of Her poetry and prayer.

Lebanon: The land that provided a safe haven to establish a stable monastic and parish life, as well as schools to educate the children of the close knit and devout Maronite families. Maronites have been a positive force for the development of Lebanon as a country of peaceful coexistence for all peoples. Maronites now live in many cultures, their Mother Church is in Lebanon and daughter communities exist throughout the world.

The Maronite Patriarchal Assembly (2003-2004), made up of over 500 Maronite participants – clergy, religious and laity – from throughout the world, described the identity of the Maronite Church by five distinguishing marks:

First and foremost Maronites are Antiochene – where Christ’s followers “were called Christians for the first time” (Acts 11:26). Maronites share an historical, liturgical and spiritual heritage with all the other Catholic and Orthodox Antiochene Churches. Maronites are also heirs of Syriac cultural and religious heritage, whose language, poetry, and hymnody were the means used to express the mystery that God is beyond all descriptions yet has come close to us in Christ.

Second, Maronites are Chalcedonian, meaning they were staunch supporters of the Council of Chalcedon, convened in 451 A.D., which taught that Jesus was true God and true man. In this formula, Maronites found a balance and way of life that placed them forever in the communion of the universal Church.

Third, the Maronite Church is Patriarchal and Monastic. Saint Maron was a hermit-priest. The first Maronites were monks, priests and laity associated with the monasteries of Saint Maron in the 5th – 8th centuries. Her first Patriarch, Saint John Maron, was chosen from among the monks. Maronites have a cherished history known for an ascetical life of sacrifice and devotion.

Fourth, the Maronite Church is known for Her love and devotion to the See of Peter in Rome.This relationship has allowed Maronites to fully express the Catholic faith held from the beginning, and at the same time be part of the balance between East and West.

Fifth, the Maronite Church is tied to Lebanon, Her spiritual homeland and the land of Her Patriarch and people.

THE MARONITE CHURCH AT A GLANCE

The command of Jesus continues to find partial fulfillment in the missionary work of the Maronite Church: “Go into the whole world and proclaim the gospel to every creature.” (Mk 16:15) Today there are millions of Maronite Catholics throughout the world. The Patriarch, in communion with the Pope of Rome, resides in Bkerke, Lebanon, with a summer residence in Dimane.

Seminaries: Ain Saade, Ghazir and Karm Sadde in Lebanon; Washington, DC in the United States; Maronite religious orders and communities have houses of formation in Rome and in Lebanon. The Maronite College in Rome houses student priests who seek advance degrees.

The United States is home to two Maronite Eparchies with over 80 parishes and missions, along with a Seminary, Monastery, Convent and Shrine to Our Lady of Lebanon.

Toward the end of the seventeenth century, religious life became more organized, new orders were founded and their mission expanded, monks, nuns and religious priests and brothers serve in schools, universities, hospitals, parishes, missions, orphanages, and nursing homes in Lebanon, the Middle East, and in many places throughout the world.

Today there are several religious orders and congregations for men and women numbering hundreds of religious. Some are of Pontifical right, some Patriarchal and some are Eparchial, which means they are dependent upon the Pope, Patriarch or Eparchial Bishop respectively. Each order and congregation has its own rule of life and focuses on living the evangelical counsels of poverty, chastity, and obedience according to the charisma of their founders.

A monastic spirit permeates Maronite prayer and liturgical life making asceticism and sacrifice an important part of the relationship with God. The effects of this spirituality are seen in the Maronite family, the first school of love where each finds his or her own vocation to love God and serve others.

Since all language about God is limited by finite human nature, poetry is a natural means for the Maronite Church to express the proper awe and humble reverence due to God in worship.

In the Maronite Church, the celebration of the Eucharist is known by several names: Qurbono(Syriac), Quddas(Arabic), Divine Liturgy, and the Service of the Holy Mysteries.

In this celebration, Christ is offered to the Father for our salvation and we also offer ourselves, with Him, as a spiritual sacrifice. By the actions and Words of Institution of the priest and the Invocation of the Holy Spirit, bread and wine are transformed into the Body and Blood of Christ, the sacrifice at the altar is made holy, and so are we.

Before the Holy Mysteries are celebrated, the priest and people prepare themselves. The priest, deacon or subdeacon prepares the bread and wine on a side altar. The Divine Liturgy begins, first with the Service of the Word and then the Service of the Eucharist (Anaphora).

Our Lady of Elige

The Importance of Syriac 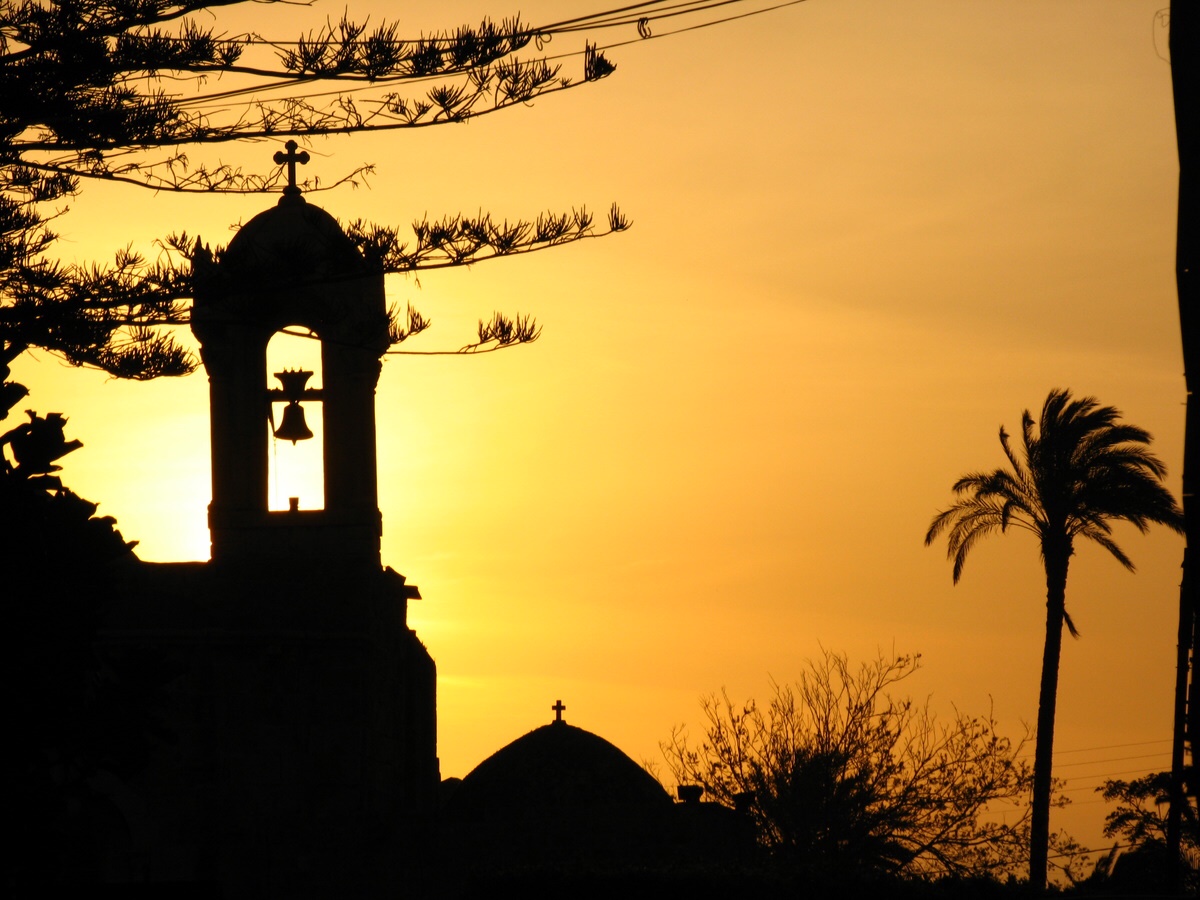