St. Maron – St Maron (also spelled Maroun) is the spiritual father of the Maronites, and the saint from whom the Maronite Church draws it’s name.

Of all the Eastern rite Churches, the Maronite Church is the only one known by the name of a person—St. Maron. Born in the middle of the fourth century, St. Maron was a hermit, who, by his holiness and the miracles he worked, attracted many followers. After his death around the year 410, his monastic disciples built a large monastery in his honor, from which other monasteries were founded.

The followers of St. Maron, both monks and laity, were always faithful to the teaching of the Pope. The Maronite Church is the only one among the Eastern Churches that has always maintained its bonds with Rome and the Successor of St. Peter. In fact, in 517, as controversy continued to rage over the decisions of the Council of Chalcedon (451) regarding Christ as “true God and true Man,” persecution of the Maronites broke out which resulted in the martyrdom of 350 Maronite monks on account of their defense of the Council’s decrees. Because of this, the Maronites were also known as the “Chalcedonians.” Even today, on the feast of Saints Peter and Paul, our liturgy prays: “O Lord, preserve your children from all error or deviation, grant us to live and die proclaiming: ‘Our faith is the faith of Peter, the faith of Peter is our faith!’” During the seventh century, the Maronites again suffered persecution and fled for refuge to the mountains of Lebanon. There they maintained and grew in their Christian faith and culture. At the time of the Crusades, close bonds were established by the Maronites with the West which have endured to this day. Later on, the Holy See sent missionaries to Lebanon, and in 1584, Pope Gregory XIII established the Maronite Seminary in Rome.  Thus throughout history, there have been continuous and close relations between the Maronites in the East and western countries in Europe.

St. Ephrem (306-373) Poet, teacher, orator and defender of the faith, Ephrem is the only Syrian recognized as a doctor of the Church. He took upon himself the special task of opposing the many false doctrines rampant at his time, always remaining a true and forceful defender of the Catholic Church.
The writings and theological poetry of St Ephrem are the patrimony of the Maronites, and one familiar with his poetry, types and images will find them throughout the Maronite liturgy.

Born in Nisibis, Mesopotamia, he was baptized as a young man and became famous as a teacher in his native city. When the Christian emperor had to cede Nisibis to the Persians, Ephrem, along with many Christians, fled as a refugee to Edessa. He is credited with attracting great glory to the biblical school there. He was ordained a deacon but declined becoming a priest (and was said to have avoided episcopal consecration by feigning madness!).

He had a prolific pen, and his writings best illumine his holiness. Although he was not a man of great scholarship, his works reflect deep insight and knowledge of the Scriptures. In writing about the mysteries of humanity’s redemption, Ephrem reveals a realistic and humanly sympathetic spirit and a great devotion to the humanity of Jesus. It is said that his poetic account of the Last Judgment inspired Dante.

It is surprising to read that he wrote hymns against the heretics of his day. He would take the popular songs of the heretical groups and, using their melodies, compose beautiful hymns embodying orthodox doctrine. Ephrem became one of the first to introduce song into the Church’s public worship as a means of instruction for the faithful. His many hymns have earned him the title “Harp of the Holy Spirit.”

He preferred a simple, austere life, living in a small cave overlooking the city of Edessa. It was here he died around 373.

Saint Rafka  was born in the small village of Himlaya on the mountain slopes of Lebanon in 1832. At the age of 21, she entered an order of sisters which later dissolved in 1871. In that same year, she entered the Lebanese Maronite Order. For the next 26 years she lived and worked at the Convent of St. Simon.
On the feast of the Holy Rosary 1885, Rafka prayed to our Lord that He might allow her to share in the suffering of his crucifixion. From that night on, her health began to deteriorate and soon she became blind and crippled, yet she rejoiced in being made worthy to participate in the suffering of our Lord. After years of acute pain, she died on March 23, 1914 at the Convent of St. Joseph in Lebanon, and since then, many miracles have been attributed to her intercession. In 1985, Pope John Paul II raised her to the honor of the altar, proclaiming her “Blessed” and in 2000 she was canonized a “Saint.” May her prayer be with us. 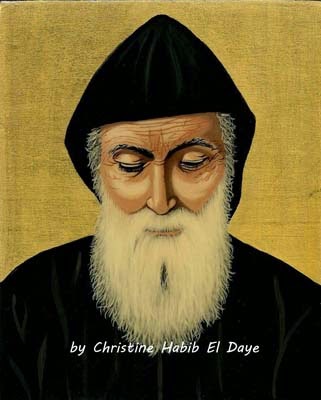 Saint Sharbel   was born in 1828. He entered St. Maron Monastery in Lebanon in 1853 and lived there as a monk and priest for 16 years. Then, hearing the call of God to a life of greater solitude and prayer, he was given permission to become a hermit. For the next 23 years he gave himself in total dedication to God and the Church in his hermitage by a life rooted in the Scriptures, love for the Eucharist and the Mother of God.

After living a holy life hidden in Christ, he died on December 24, 1898. On the evening of his funeral, his superior wrote: “Because of what he will do after his death, I need not talk about his behavior.” A few months later, a bright light was seen surrounding his tomb. The superiors ordered the tomb to be opened, and they found his body perfectly preserved. Scientific experts and doctors are unable to explain this. Since his death, thousands of re-corded miracles have been attributed to his intercession—so many, in fact, that he is known as the “Wonderworker of the East.”

In 1965, at the close of the Second Vatican Council, Pope Paul VI declared: “ … a hermit of the Lebanese mountain is inscribed in the number of the blessed … a new eminent member of monastic sanctity is enriching, by his example and his intercession, the entire Christian people… May he make us understand, in a world largely fascinated by wealth and comfort, the paramount value of poverty, penance and asceticism, to liberate the soul in its ascent to God.” On October 9, 1977, Pope Paul canonized St. Sharbel at the World Synod of Bishops. May he intercede with God for us. 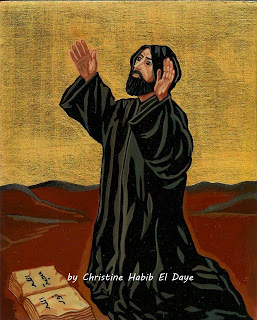 St. Nimtullah Hardini: Youssef Kessab was born in Hardine, in North Lebanon, in the year 1808, from a devout Maronite Catholic family, Gergis Kessab and Mariam Raad. As a youngster he attended the school of the monastery of the Maronite Lebanese Order of Saint Anthony, in Houb (1816-1822). After that he joined the monastic life in that same Order, and put on the novitiates’ uniform in the monastery of Saint Anthony the Great, Gazo d’Hayo (pronounced Kozhayya in Lebanese, from the Aramaic Gazo d’Hayo, meaning the treasure of life, a term that is often used in Aramaic Maronite terminology to refer to the Sacristy, where the Eucharist and the martyrs and saints relics are reserved), in November 1828, taking the name of brother Nimatullah (which means the grace of God). He spent there some peaceful time growing up in holiness and learning some skillful trades, like binding books in the monastery’s printing house. In 14 November 1830, Nimatullah professed his solemn vows. And after he finished his theology studies, he was ordained to the sacred priesthood in the monastery of Saints Qobrianos and Youstina, in Kfifane (Batroun, North Lebanon), in December 25th, 1833, by the laying hands of his Excellency bishop Simon Zouein.

He was elected a Counselor (Provincial) by his Order’s chapter for three times: 1845-1848; 1850-1853; & 1856-1858. He always worked in binding books even when he was a Counselor in the General Administration of his Lebanese Maronite Order. He was a teacher in several schools run by his Order, especially the one annexed to the Kfifane monastery. One of his best students was Saint Sharbel Makhlouf, who studied under Saint Nimatullah from 1853-1858.
Nimatullah died in the monastery of Saints Qobrianos and Youstina, in December 14, 1858, after being severally ill for years. After an order from Patriarch Boulos Massad, and because of the demands of the increasing visitors, his uncorrupted body was closed in a sealed coffin and moved to a separated cell in the monastery in 1862. In May 4th, 1926, his beatification case was presented to the Holy Sea in Rome. In September 7th, 1989 he was declared an honorable.

In May 18th 1996, and according to the orders of Patriarch Mar Nisrallah Peter Sfeir, a committee was appointed to examine Saint Nimatullah’s body, which was moved to a new coffin, then placed in a new room in the same monastery in March 26, 1998.
God granted his people many healing and miracles through the intercession of Saint Nimatullah, among these several we mention just few samples here: making a blind man to see, and another paralyzed to walk erect, and brining back to life a child who was dead, healing another child, and healing from cancer and other neurotic illnesses.

In May 10, 1998, Pope John Paul II, presided the great celebrations of his beatification. (and then of his canonization a Saint for the Universal Catholic Church, in May 16th, 2004-this last line in italic I added). May his prayers be with us always. Amen.