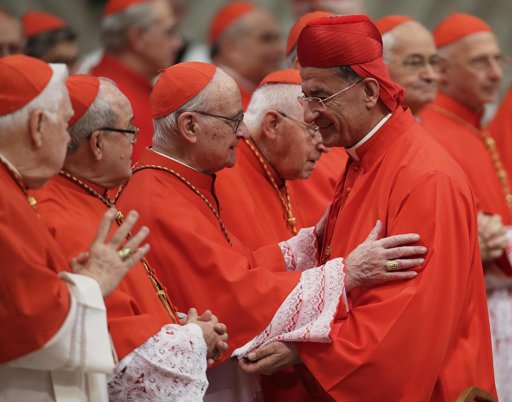 YES!  We are in communion with Rome and therefore with the Holy Father.  The Maronite Church is one of 23 Eastern Churches, and our Patriarch is Cardinal in the Catholic Church.

Does attending Maronite Mass (Divine Liturgy, or Holy Mysteries/Qurbono) satisfy my Mass obligation?  Can I receive Communion at a Maronite Mass if I am Roman Catholic or say, Coptic Catholic?

Yes, the sacraments are valid throughout the entire Catholic Church.

Is St Sharbel’s a part of the Archdiocese of Portland?

This is a yes and no answer.  No, we are not canonically part of the Archdiocese – we are part of another (Maronite) diocese.  The Maronites, and other Eastern Churches in the Catholic Church, call their dioceses “eparchies.” We are a member of Our Lady of Lebanon Maronite Eparchy and our bishop is the Most Rev. A. Elias Zaidan.  The yes part is that we are geographically located in, and have a fraternal relationship with the Archbishop and the Archdiocese.

There are Catholics in the Middle East?

Yes, and Maronites and many other Eastern Catholics are proof. Let’s not forget that Christianity originated in what we now call the Middle East, because Christ himself lived and preached there.  The Maronites originated in lands spoken of in the Old and New Testaments.  Sadly, due to persecution and war the numbers of Catholics living in the Middle East are dwindling.  Maronites, however, remain strong and can be found in Canada, the US, Central and South America, Europe, and Australia.